A WWI pair of British War and Victory medals both named to 444863 Pte C.W. Cosseboom, 58-Can Inf. With Memorial Plaque named to “Clinton William Cosseboom.”   Cosseboom was born 25th December, 1896 at Ledge Charlotte, New Brunswick.  He was the son of William Cosseboom of St. Stephen, NB.  Clinton William Cosseboom was serving with the 58th Canadian Infantry Battalion when he was Killed-in-action 6 June, 1916. With papers and photocopied cuttings from the local “Daily Telegraph” newspaper stating that “One of the Heroes  of the 26th gone: In yesterday’s casualty list there appears among those killed in action the name of Private Clinton William Cossaboom of St. Stephen NB who distinguished himself on several occasions and Sir Max Aiken’s official report on February 3 said as follows: On the night of January 29 a patrol consisting of Lieutantants Sturdes and Winter, Sergeant Pierce and Private Cossaboom of teh 26th New Brunswick Battalion cut through the German wire and made a very useful reconnaissance.  Private Cossaboom is a native of The Ledge, situation about five miles from St. Stephen and is well known in that district and it will be with great regret that his many friends will learn of his death.    Extremely fine with original silk ribbon. 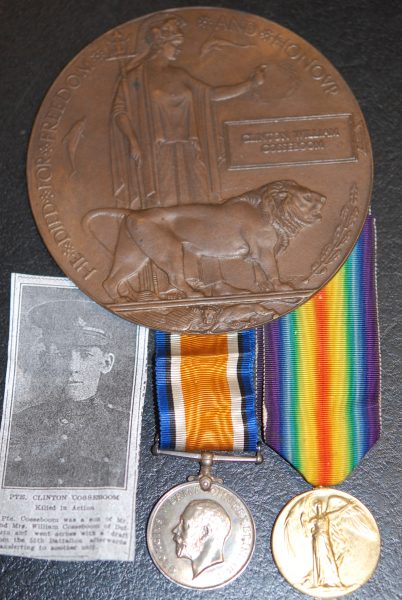