The extremely rare Naval General Service Medal awarded to John Joyce, Midshipman aboard the 36-gun frigate Phoebe at the capture of the French 36-gun frigate Néréide after a long running fight and a severe close broadside contest in the Bay of Biscay on 21 December 1797

Naval General Service 1793-1840, 1 clasp, Phoebe 21 Decr 1797 (John Joyce.)
Footnote
Provenance: Dix Noonan Webb Auctions (Mayfair, London).
John Joyce is confirmed on the Admiralty Claimants List, his rating of ‘Midshipman’ indicated by a ditto mark under the entry above his name for Midshipman S. J. B. Pechell. Although his name has been overlooked by Captain Douglas-Morris and also in British Battles & Medals, he is properly recorded in all other published rolls (Colonel Hailes, Newnham, and Message). The absence of his rank on the edge of his medal would seem to indicate that he progressed no further in his pursuit of becoming a commissioned officer. Nevertheless, it is a unique name on the rolls and one of only 6 clasps issued for this action that resulted in the capture of the French frigate Néréide, taken into the Royal Navy under the same name.Of the other five medals with this clasp, one each are held by the National Maritime Museum and by the Museum of the Royal Navy, and two are held in private collections. The whereabouts of the final medal to Stephen Lawrie is not known but it was remarkably issued with all six clasps won by this frigate, namely Phoebe 21 Decr 1797, Phoebe 19 Feb 1801, Trafalgar, Off Tamatave 20 May 1811, Java, and Phoebe 28 March 1814.Capture of the Néréide
On the 21 December 1797, at 10:00 am, the Phoebe observed a ship standing towards her which by 11:30 am was identified as the French Néréide. Captain Barlow immediately gave chase, came up within gunshot of the enemy ship at 9:00 pm, which commenced firing her stern-chasers into Phoebe, considerably damaging her masts, sails, and rigging. A running fight continued until 10:00 pm when the two ships came fairly alongside each other and, after a close action of 45 minutes, the Néréide received considerable damage in her masts, rigging, and sails, some falling on board the Phoebe. At 10:45 pm, just as the British ship was about to renew the attack, the Néréide hauled down her light and hailed that she had surrendered. The prize was later purchased by the Royal Navy.
Dark toned, nearly extremely fine and extremely rare 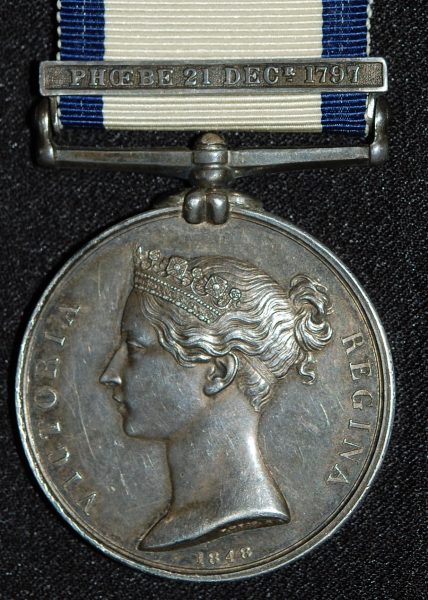 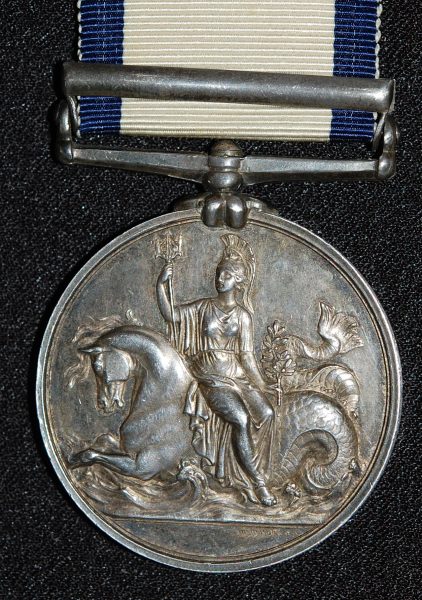