Army Meritorious Service medal (Geo V) with exceptionally rare CANADA reverse to “30372 W.O. 2 S. Beard, C.A.S.C.” With documents/research. Warrant Officer 2 Sidney Beard was born in London in April 1882 and enlisted into the Canadian Overseas Expeditionary Force in September 1914. Posted to the C.A.S.C. 1st Divisional Train, he subsequently saw service in Canada, the UK and France, receiving promotion to Company Quarter Master Sergeant in May 1917. Beard, who was also the recipient of a War Service Badge, was demobilised in May 1919, settled in London, Ontario and died there in October 1960.

The MSM is an award for excellent and good service, meaning that Beard was exemplary in his conduct throughout his service. The special significance of the MSM is that after the first 104 were awarded with the “Canada” reverse, the rest of the MSM’s became general commonwealth awards. Therefore, there are only 104 MSM’s with Canada reverse ever to have been awarded. Of that number, it is unclear as to home many may still exist or were actually given out. There may only be about 50 such medal anywhere in the world. 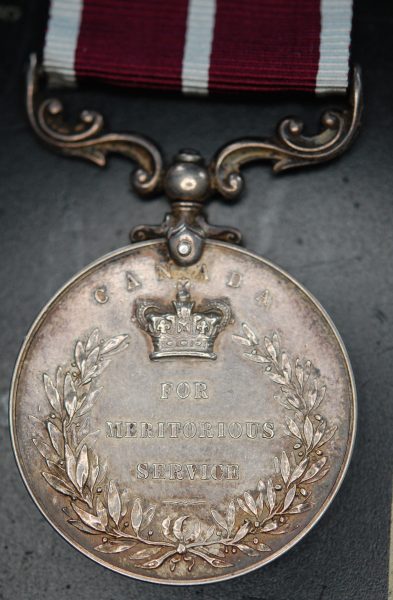