An emotive Albert Medal for Land and Society for the Protection of Life from Fire Medal pair awarded to Mr. E. Bell, Canadian Copper Company, for gallantry in saving the lives of seven men, women and children during the terrible tornado-induced forest fire at South Porcupine, Tisdale, Ontario, 11 July 1911

An emotive Albert Medal for Land and Society for the Protection of Life from Fire Medal pair awarded to Mr. E. Bell, Canadian Copper Company, for gallantry in saving the lives of seven men, women and children during the terrible tornado-induced forest fire at South Porcupine, Tisdale, Ontario, 11 July 1911, which destroyed the town and led to the seared deaths of 77 of its residents – in burning heat he doused the flames for two hours with water from his old felt hat

Albert Medal, 2nd Class, for Gallantry in Saving Life on Land, bronze and enamel, the reverse officially engraved ‘Presented in the name of His Majesty to Edward Bell for Gallantry in saving life at the Township of Tisdale, Ontario on the 11th. July 1911’, in case of issue, the riband still bearing the original bestowal ‘hook’; Society for the Protection of Life from Fire Medal, silver (Edward Bell, South Porcupine 11th. July 1912 [sic]), with top silver riband buckle.

‘On the 11th July 1911 a disastrous forest fire broke out in the neighbourhood of the town of South Porcupine, Ontario, destroying the town and mining camp, and the perilous position of the inhabitants was aggravated by a sudden tornado. A party, including the manager of the Dome Mines and his family and two employees of the mining company, managed with great difficulty to pass through the smoke and flames to some water barrels, but then collapsed from exhaustion, and were unable to use the water so as to keep their clothes from catching fire from the showers of sparks. Bell, notwithstanding the dense smoke, which had incapacitated the party, went to their rescue, and stood by them for nearly two hours, damping their clothes, and by this and other means preventing further injury by fire. By his courageous action he was instrumental in saving the lives of seven persons.’

Hero of the Porcupine Fire
‘The summer of 1911 was dry and hot, bush fires were a frequent occurrence, and, on 11 July, a bush fire that could be heard roaring far to the west fanned on by a wind of sixty miles velocity swept over the whole Porcupine area leaving nothing but blackened ruins in its wake. About noon on that eventful day the roar could be heard some miles to the west. Mr. Meek, the Dome Mine superintendent, went over to the West Dome Mine some five hundred yards to the south. Bob Weiss, in charge of this prospect, was the biggest man in the camp, weighing 435 pounds, and he said he was going to fight the fire. There was a large clearing but, when the fire broke through the clearing, 18 men, 2 women and a child who had gathered on the rock dump near the shaft as the atmosphere became too hot, were forced to seek shelter by climbing down the ladder of the shaft and all suffocated as the air was sucked out by the burning head frame. This was the greatest single disaster in the district.
Mr. Meek returned to his house which was situated on a rocky knoll slightly above the other camp buildings. Here, together with his wife, his wife’s mother, and his two children, several men had gathered hoping that the house placed on barren rock with no combustible material near, would offer some protection. It was only a short respite for soon the house was afire and had to be vacated. Edwards Lake was three hundred yards away through burning stumps and muskeg. Mr. Meek rushed into the house, told his family of their peril, and threw open the front door to lead them out. The whole of the house front was on fire. He dashed to the back and found that the woodshed had caught too, and escape was cut off there. He determined to break through the flames from the front, but the gust which met him decided him that, whilst he might be able to win his way through, his family could not, and he turned back in despair. For the first time fortune aided him now. Opening the back door he found that the furious wind had shifted and that it now blew the flames away from the door so that the whole party could get out. Anything was better than to be cremated in that flaming house, and out they all went together, the men dragging the women, with their clothes already on fire, and the women protecting the children, only just able to walk.
Just a few yards from the back door stood six rain barrels half full. At this time the whole party only dreamed of getting out so that they could die in the fresh air: they were hemmed in by the flames, their vitality was sapped by inhaling the gaseous fumes which preceded and accompanied the fire, and hope had gone. Only it was better to die on the rock near water, if they could not reach it, than in that crackling furnace of a house. So they lay down huddled in each other’s arms near the water barrels while the smoke hung so thick that they could not see many yards and the air was full of fire. They had no longer power to move.
Suddenly a face appeared out of the smoke and a minute afterwards they felt the splash of water on their faces. It was Edward Bell, the foreman carpenter of the mine, who was ladling water out of the barrels with his old soft felt hat. Mrs. Meek’s skirt and foot were on fire, and he first applied himself to put that out. Then, cooly and calmly, whilst the fire swept all living organisms out of existence all around him and the hot air scorched his lungs, he continued to dip into the barrels, souse himself, and distribute the water impartially over the prostrate figures around him.
The fire was at its height at two o’clock, and by four o’clock the danger was over, and Edward Bell had saved seven people. They had grazed death, but they were alive mainly because Edward Bell walked out of a zone of comparative safety into a whirlwind of smoke and flame and for a full hour, never knowing when he would be roasted alive, with a level head and a steady hand, threw water out of his old hat wherever he saw a spark fall or a flame burst out on the exhausted figures round the water barrels.’ (The Toronto Globe, 4 May 1912 refers)

Edward Bell, who, according to Porcupine folklore, even recited stories to the children in an effort to keep them calm during the terrible fire, and consequently became known as ‘Dad Bell’, was recommended for a medallic award for his gallantry by Mr. A. R. Turner, the General Manager of the Canadian Copper Company, and received his Albert Medal at Haileybury, Ontario, in July 1912, almost exactly a year after the terrible fire.

One of only 21 Albert Medals awarded to Canadians, 17 of which were for gallantry in Canada. 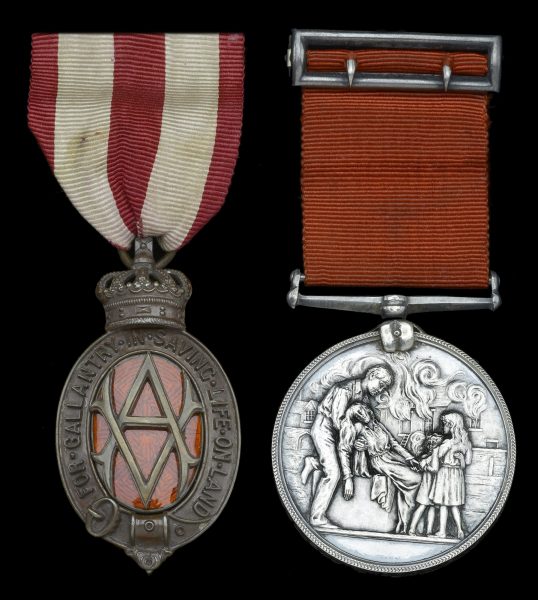 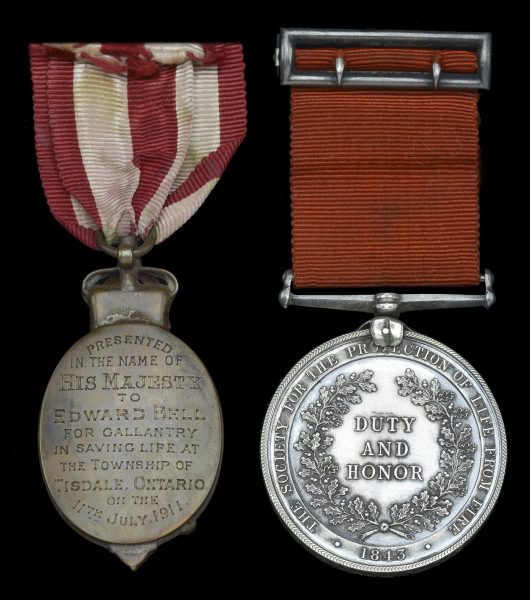