PELLEY, Corporal Cecil Wilbert Hoskin (SN-1051) – Military Medal – First Battalion, The
Royal Canadian Regiment – awarded as per Canada Gazette dated 28 March 1953. Born 21 July 1928 in Peter’s Arm, Newfoundland. Labourer before enlistment. Recommended 4 December 1952 by Lieutenant-Colonel P.R. Bingham, Commanding Officer, 1 RCR; endorsed 5 December 1952 by Brigadier M.P. Bogert, Commanding 25th Canadian Infantry Brigade; supported 31 December 1952 by Major-General M.M.A.R. West, GOC 1st Commonwealth Division; approved 20 January 1953 by Lieutenant-General W. Bridgeford, Commander-in-Chief British Commonwealth Forces Korea. For services from 1 July to 31 December 1952.
During the period 8 August to 2 November 1952, 1st Battalion, The Royal Canadian
Regiment occupied the Kowang San feature. Due to the dispersion of the companies over
a wide area, including Hill 355, the maintenance of line communication was of utmost
importance. Corporal Pelley was in charge of the line section. The frequent and prolonged enemy artillery and mortar fire continually destroyed line communications. At all hours and in all weather, he restored communications with a minimum of delay. On the 1/2 October when “A” Company was subjected to a heavy concentration, this noncommissioned officer carried out his duties with utter disregard for his personal safety. He continued to maintain and lay line for the entire forty-eight hour period under shellfire.
Due to his efforts, the period that line communications were disrupted was greatly reduced.
During the battle of Kowang San, 21 to 24 October, this determined non-commissioned
officer once again displayed great courage and leadership in line maintenance. Even
though he had been warned of the intensity of shelling in one particular area, he, without
hesitation, laid a line through the area to a company position. This courageous noncommissioned officer’s determination and fortitude was the contributing factor in
sustaining a vital link throughout the battalion at a most critical time. His untiring efforts
and determination have set an example for all ranks of his battalion. 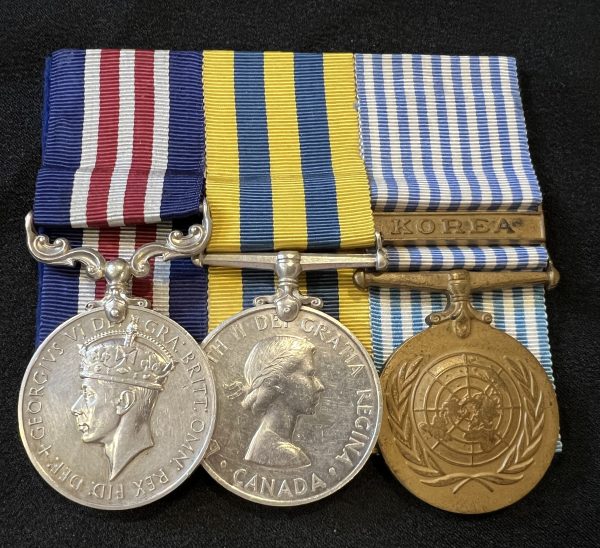