Distinguished Conduct medal GV (153382 Sgt. John Dye, MM, 43/Can Inf:); Military medal GV (153382 Sgt J. Dye, 43/Man R.; British War and Victory medals both named (153382 Sgt J. Dye, 43- Can Inf):
Sold with 79th Cameron Highlanders cap badge, collar badge and a large binder of research and paperwork. Provenance: Liverpool medals.
A Brave Scotsman of the Canadian Cameron Highlanders, who was wounded in action on three separate occasions , one a severe gunshot wound to the chest later causing his discharge, still afterwards earning the MM for bravery in the France and then the DCM in an epic defence during the night, following on from over 24 hours of consistent fighting, 10000 yards in advance of the troops, dominating the crossing of the Sensee River, driving off a German attack in full strength as well as three hostile patrols, killing three of one patrol himself.
John Dye was born in Montrose, Forfashire, Scotland on 18th October 1891, previous a butcher who was living in Canada, a regular member of the 79th Cameron Highlanders of Canada Militia.
He enlisted on 8th June 1915, being sent to England first then spending some time in Hospital with influenza before he could be sent to France.
He embarked for France on 20 Feb 1916, only a month after landing in France, he was in action at Ypres, where he suffered a gunshot wound to the leg at Etaples, whilst engaged at forward Listening Post.
He rejoined his unit on 20 May 1916, while the regiment was suffering heavy shelling and aerial battles . One week later on 27th May, 1916, the camp was under attack from aerial bombers, with two bombs lading unexploded. Sgt Dye was subject to another severe gunshot wound to the chest. It was a through and through, narrowly missing his heart. He was invalided to England for surgery and recovery. He returned only to be wounded in action again with a 3rd and 4th gunshot.
Dye was appointed Acting Sergeant in the Field on 27th November 1917. His MM was awarded in the London Gazette on 3rd July, 1919. His DCM was first announced in the London Gazette on 18 February, 1919, followed by a citation on 10 January, 1920.
D.C.M. citation reads: For conspicuous gallantry and devotion to duty on 27th and 28th August 1918, in the attacks at Vis-en-Artois and Remy. On the night of 27-18th he held the outpost line 1000 yards in advance of the troops on the left and dominating the crossing of the Sensee River. He drove off an enemy attack in strength as well as three hostile patrols killing three of one patrol himself.
Dye was later demobilised after the war in 1919, suffering from the wounds he had received. Some obverse scratches to DCM, very fine. 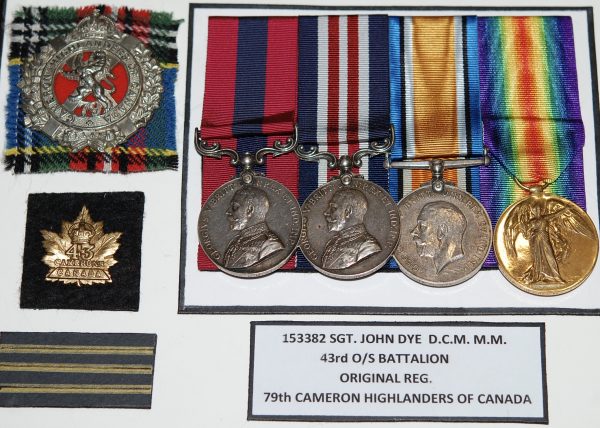 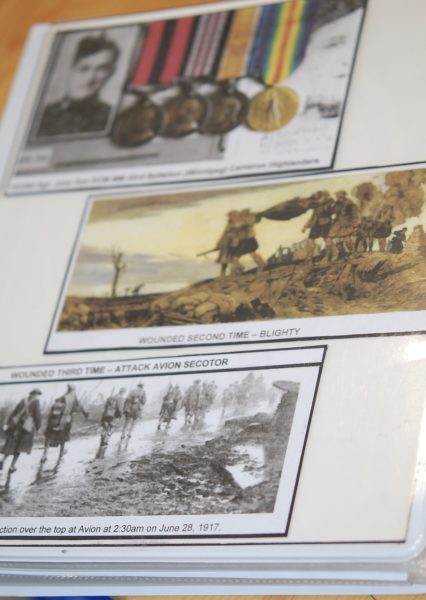